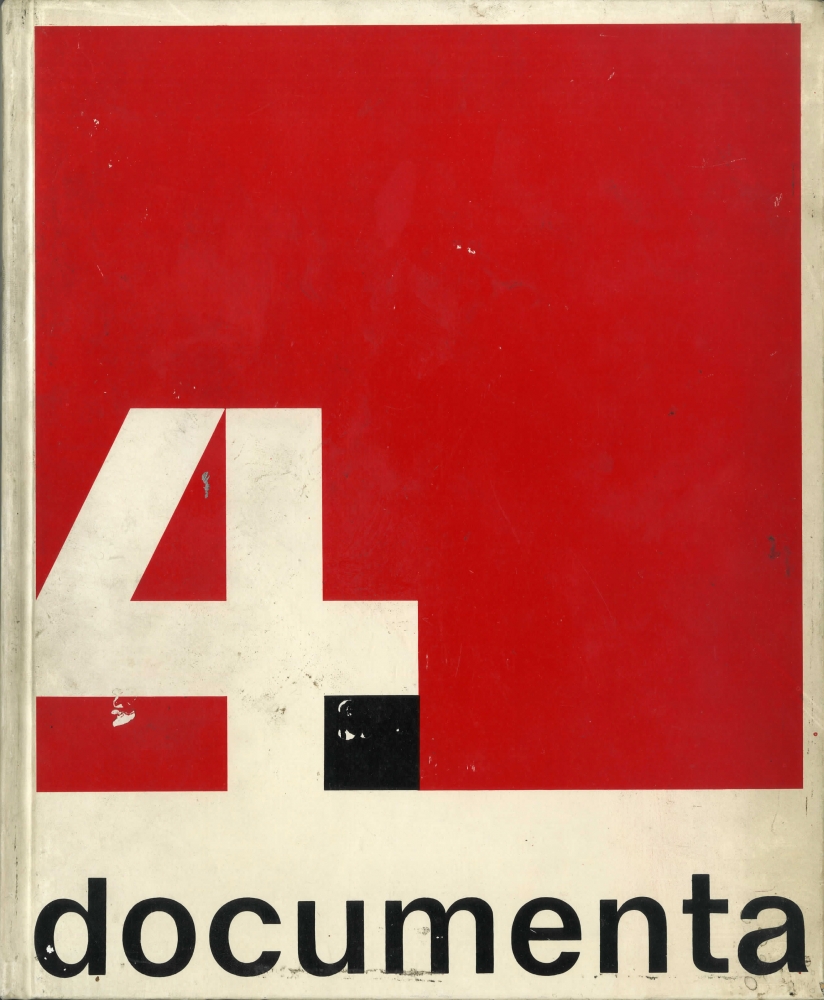 The subject of Distraction Series 6 is documenta 4, which took place in Kassel, Germany, from June 27th to October 6th, 1968.. Arakawa was invited to participate in this recurring international art exhibition in that year as well as in 1977.

documenta began in 1955 as a way to bring West Germany back into the international art scene and modernist art, which had been labeled ‘degenerate art’ under the Nazi regime, back into Kassel’s local purview. 1968, a pivotal year that saw protests across the globe, marked a serious shift in content for documenta, moving from essentially retrospectives of modernist art to an exhibition of more current artwork, signaled by the slogan, “The Youngest documenta Ever”, although the official title was, "Art is what artists make". Artistic Director, Arnold Bode, though still largely responsible for the exhibition, stepped down, opting for a more democratic process with many of the final decisions left to a particularly youthful advisory board who selected very recent works. Indeed, much of the art by the 149 featured artists was made that year and at times even specifically for the exhibition. While this was seen as a positive move as it presented a broader concept of art to the audience, criticism was levied at the board for a heavily American roster of supposedly international artists. 51 of the 149 artists were from the United States, earning documenta 4 the nickname “Americana.” From a historical perspective, it is interesting to note that these works did not overtly reflect the political situation unfolding in the United States at the time. These American artists represented pop art, minimal art, color field art, op art, post-painterly abstraction, and, to some degree, conceptual art. Artists from Germany and elsewhere with conceptual and performance-based practices (for example Fluxus and Happenings) were not included, leading to protests at the opening ceremonies. Four German artists led a disturbance action called the “Honey Blind”, in which they poured honey on microphones and furniture and went around hugging and kissing those who were meant to give speeches. Students waving red flags joined in the protest.

While we have not yet found any materials in the RDF archive about what Arakawa and Madeline’s thoughts were on documenta 4 and the civil rights protests in the U.S., we do know that throughout their lives, from Arakawa’s early involvement in the anti-establishment Neo-Dadaism Organizers’ group in Tokyo, to their joint interest in Code Pink, to Madeline’s support of the Occupy Wall Street movement, their work was about the breaking of fixed boundaries, whether mental, physical, or institutional. The six works by Arakawa included in documenta 4 all explore these ideas. See below for more in-depth information about some of these works. 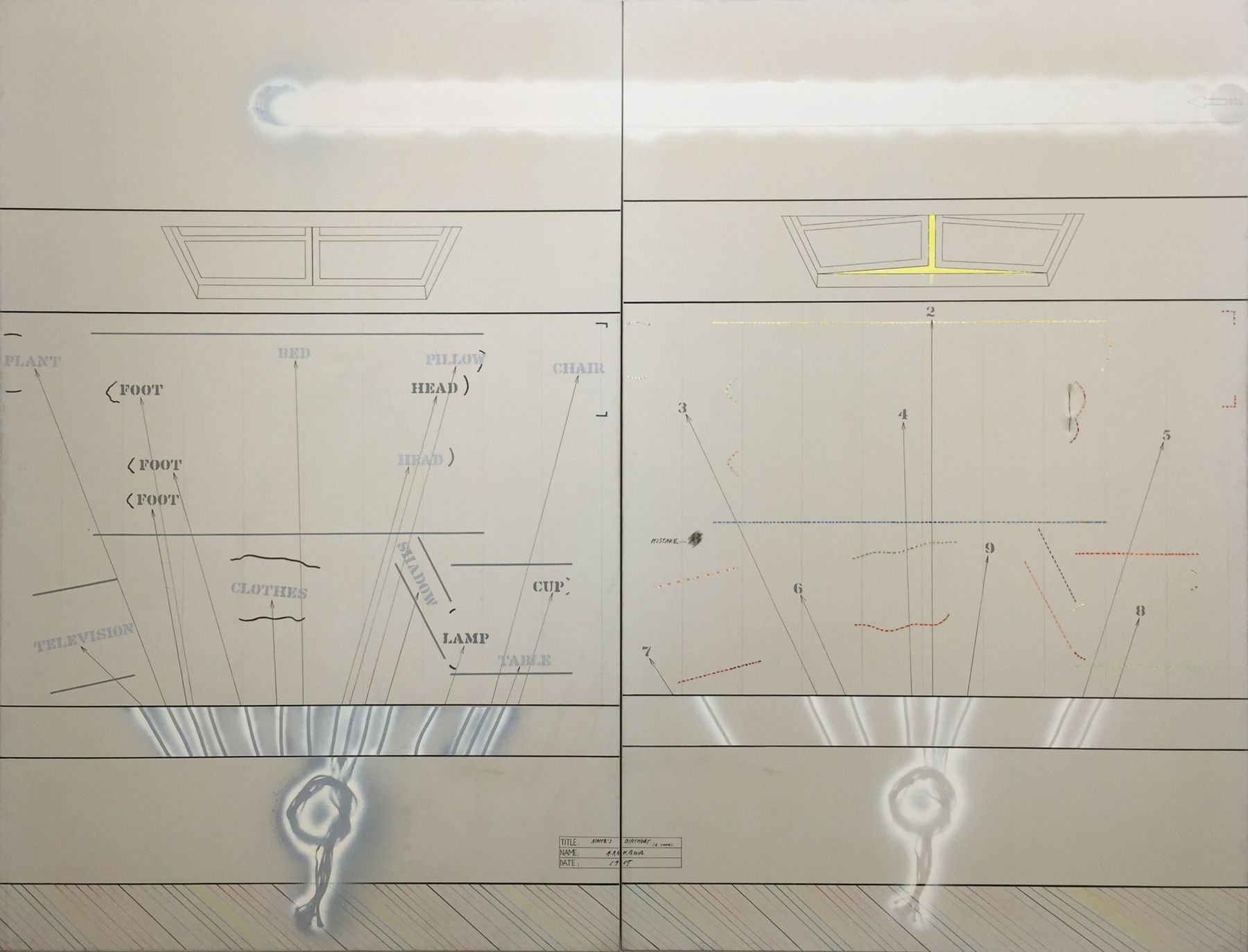 In Name’s Birthday (a couple), 1967, Arakawa offers a bird’s eye view into the plan of a room with a window on one of the walls. This room is represented in slightly different ways on two canvasses. On the left panel, lines and brackets denote the boundaries of objects that are represented by words and placed within the room. Reminiscent of a blueprint, the objects exist as surfaces rather than volumes. An arrow leads to each word/object from the shadow of a loose knot of string, perhaps a physical demonstration of the interaction between objects as they move through and exist within space. The rope shadow, achieved by spray-painting over an actual rope held against the canvas, is a clear indication of a poly-dimensional space. On the right panel, numbers have replaced the words, as if to stress the language of a blueprint to a greater extent than on the left panel. We also find that the window is open, and light, represented by a dense yellow color-field, fills the cracks and we might imagine it pouring into the room, and down to the bottom space of both canvasses, where it is extracted into its spectral form in a zone separated from the main body of the canvas. The fact that the two panels do not perfectly line up also shows a slight shift in perspective and highlights movement in general, reinforced by the circle at the top of the painting with an arrow indicating motion from right to left, with the object’s path traced in a series of after-images. The label of ‘mistake’ on the right panel brings us back into the canvas’s lived dimension. 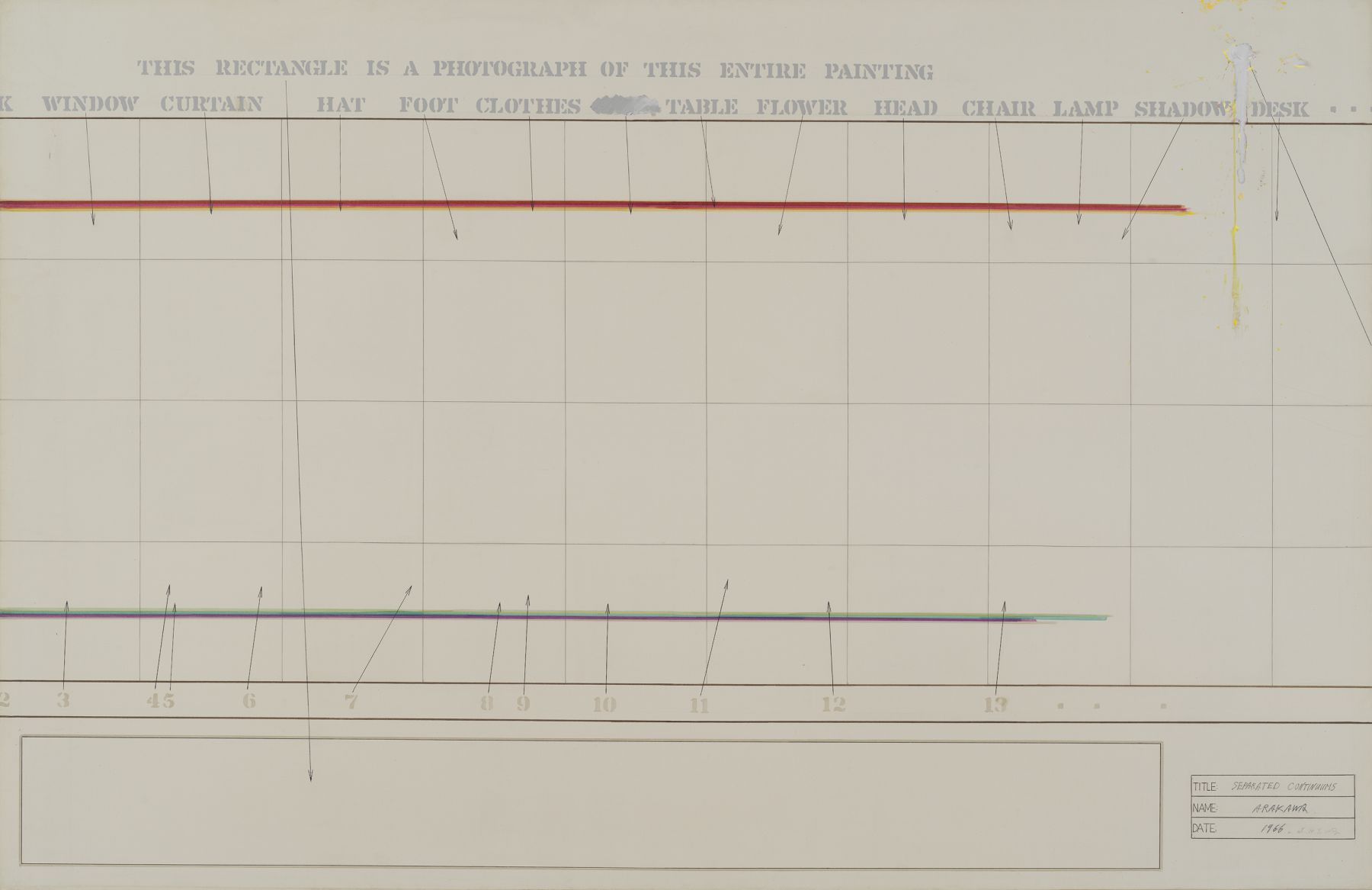 In Separated Continuums, 1966, we find words standing in again for the everyday objects they name, this time within a grid and along a line presumably representing a time-space continuum. Rather than any kind of perspective, Arakawa has used the temporal dimension to order our understanding of space. In this case, the numbers along a separate continuum might indicate the difference between our lived and perceived experience, or alternatively the space between the concept or existence of an object and our perception of it. 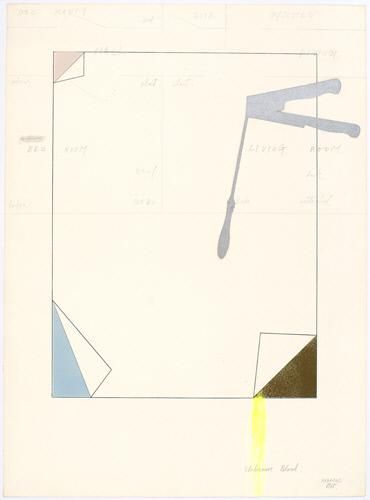 Unknown Blood, 1965, is the only drawing by Arakawa included in documenta 4. Here, a picture field has been drawn in over a diagram of an apartment or house. This picture field has been stabbed in the top right corner by a flat painted knife that has two shadows indicating at least two sources of light. The first shadow maintains the shape of object, while the second shadow transforms the knife into the shape of a screw driver. The other three corners of what we might imagine is a canvas or piece of paper have been folded back, revealing space behind the image. The bottom right fold includes a splash of paint that is most likely the unknown blood referred to by the title. The knife has stabbed through the picture and this yellow blood, that looks like a splash of ectoplasm, has dripped down seemingly from another, unknown, dimension located behind the picture plane. 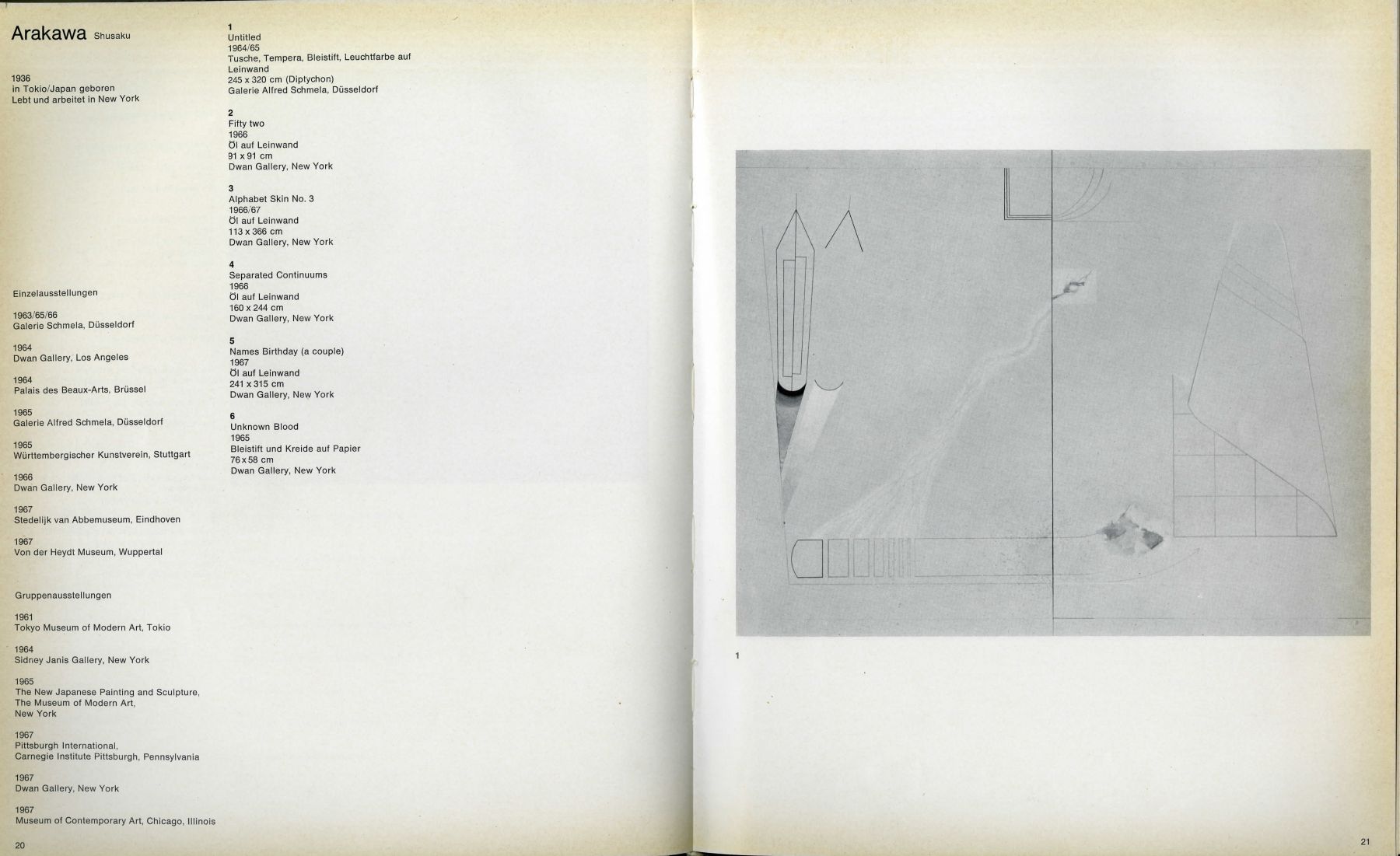 In Untitled, 1964-65, a series of models lead one from another. If we take what we have learned about Arakawa’s language of signs, symbols, and ways of representing space, then we might interpret this work in the following way. The rope or string motif is again present. Perhaps we start there, understanding the strings as objects that are interrelated and moving through time into a specific fold of gridded dimensional space as we saw in Separated Continuums, 1966. What we might call a prism at the left, give off light of different colors that also move into the fold, as indicated by an arrow. This canvas does not offer up a clear point of reference through which the viewer might be able to enter or engage with a created space or reality, but it does stimulate the intellect, ensuring that the viewer is reading and thinking and not just looking. 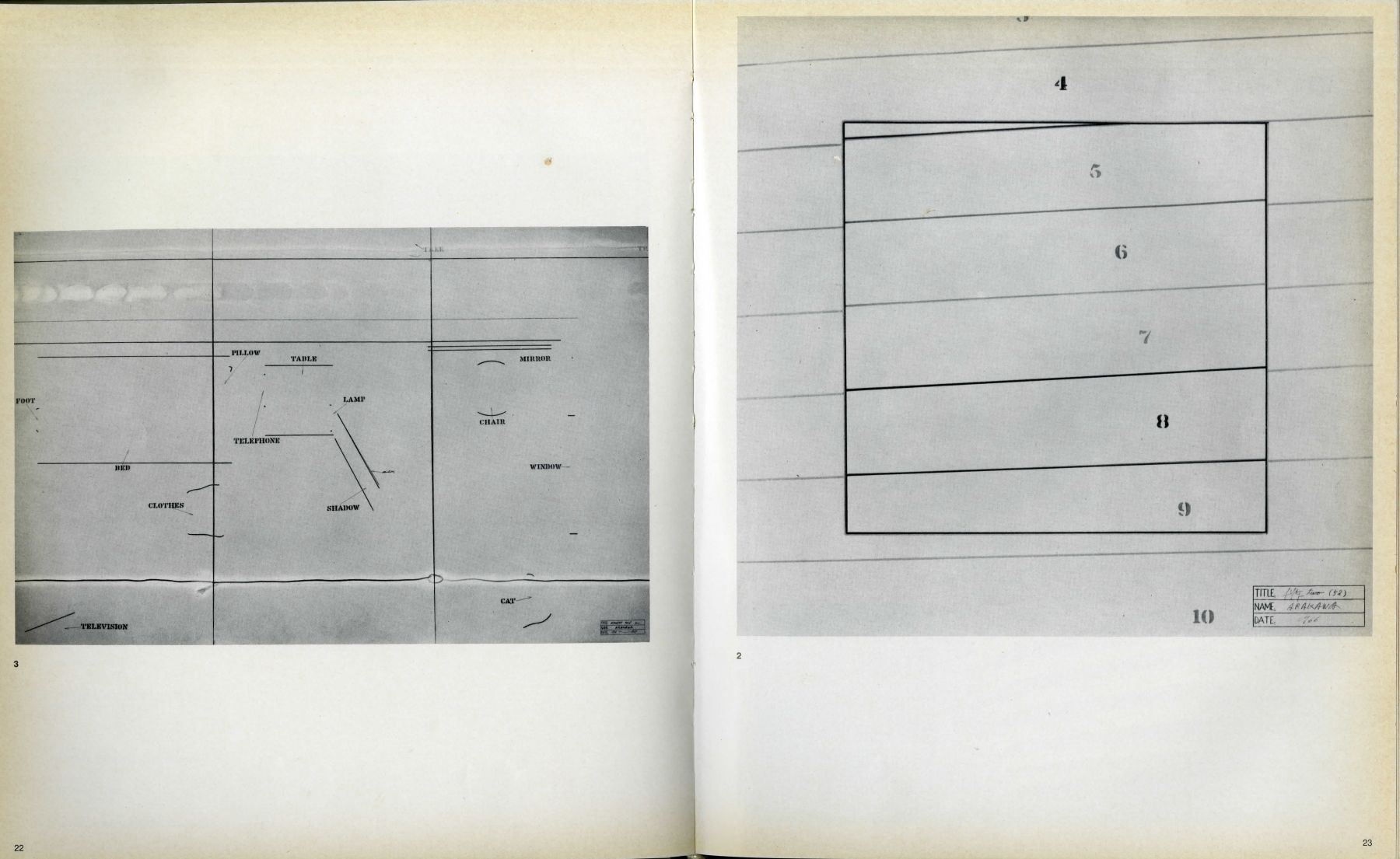 Alphabet Skin No.3, 1966-67, and Fifty two, 1966, function in similar ways to Name’s Birthday (a couple), 1967, and Separated Continuums, 1966, but the worlds of numbers and words, while both semiotic, do not collide within these paintings. 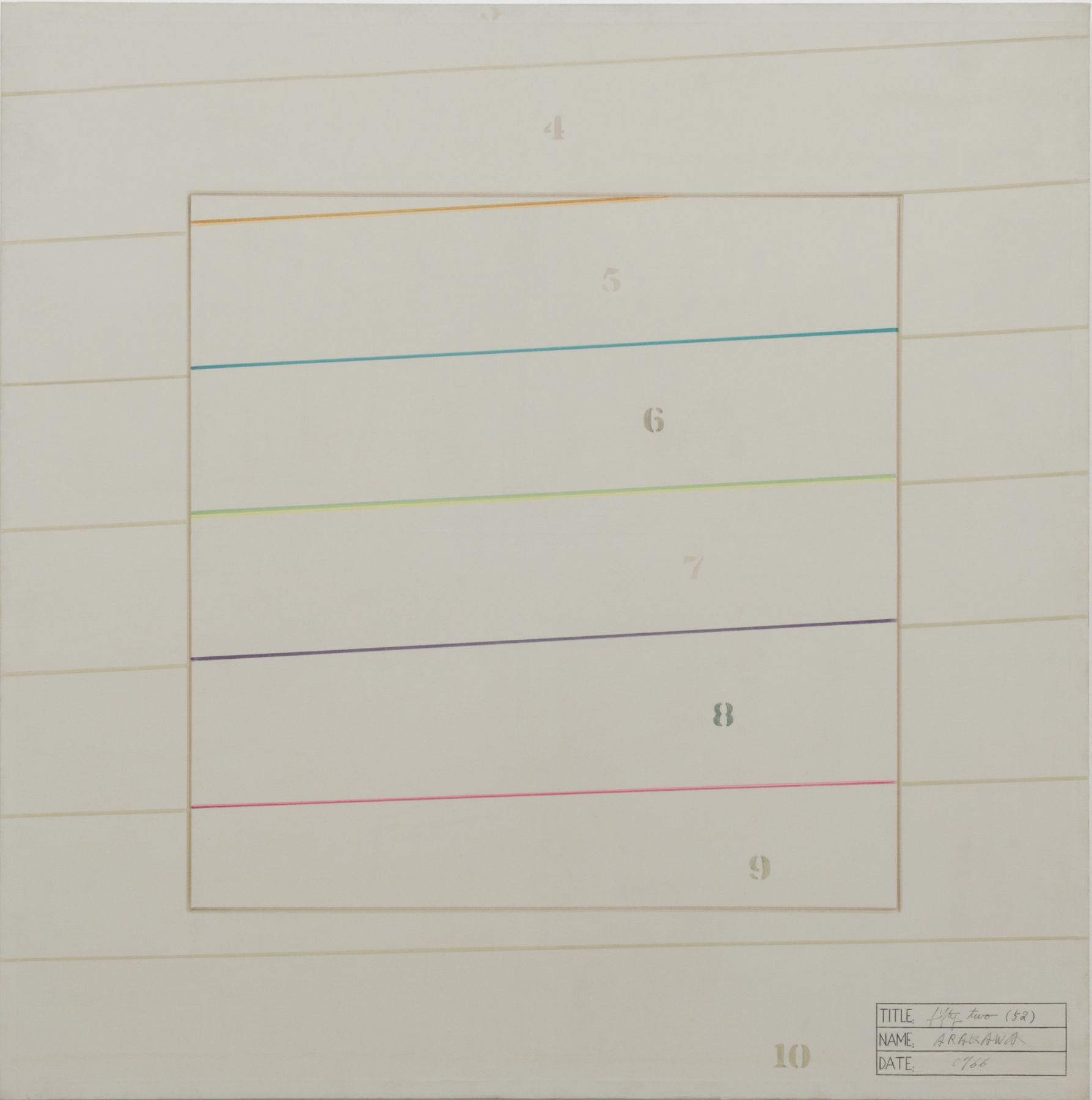