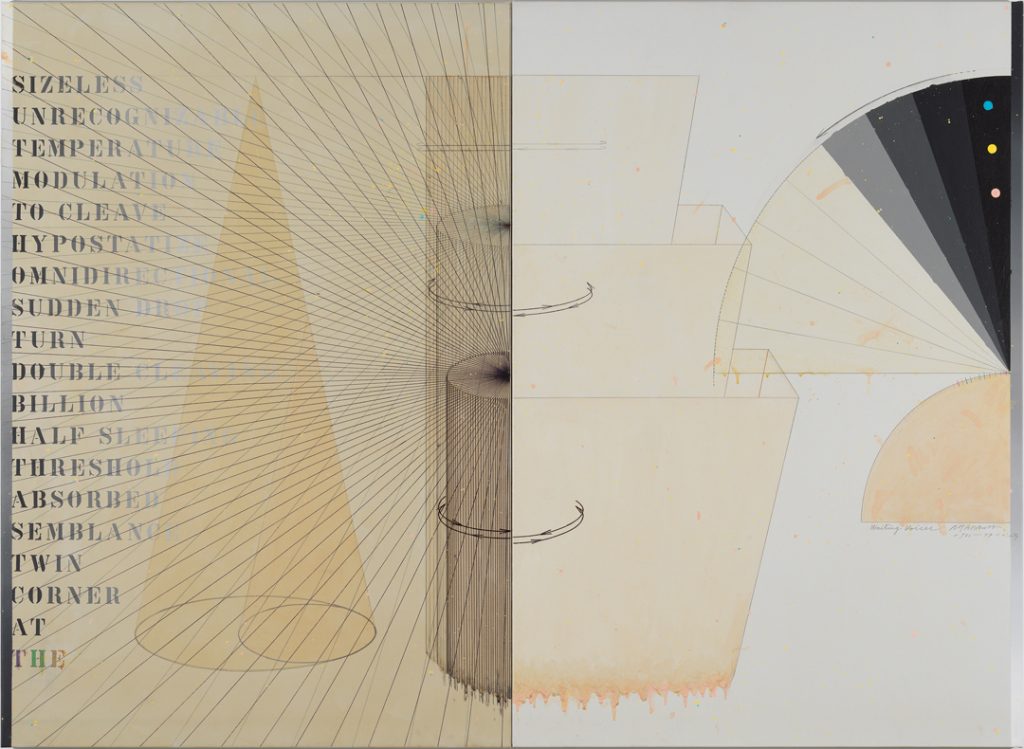 The exhibition ARAKAWA: Waiting Voices at Gagosian Gallery in Basel will be opening on November 25th, 2021. It will be on view through January 22, 2022.

The exhibition features Arakawa’s paintings and drawings produced between 1964 and 1984, the twenty-year span that saw him experimenting with diagrammatic motifs, language, texture, and space that ultimately led the artist, together with Madeline Gins, to the field of architecture. For further information, please visit the Gagosian website.

In conjunction with the exhibition, the Reversible Destiny Foundation will host a virtual lecture by Dr. Ignacio Adriasola, live from Basel on December 9th, 11 AM EST. Focusing on works featured in the exhibition, his talk will address major developments in Arakawa’s practice through the mid-1980s. This program is approximately 1 hour in length, including Q&A at the end. Click here to register in advance! 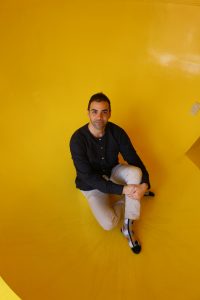 The white on off-white ground of an immense canvas stretches before us, like sand on a beach. Overlapping layers of acrylic varnish divide its surface creating a subtly dark imprint. Thin graphite lines stretch and direct our gaze across the canvas, indicating the shortest distance possible between enigmatic figures and words. Objects leave their mark, like shadows. As we step away from the canvas, we begin to discern a secret geometry: waiting voices, captured right at the moment before thought finds form.

Arakawa’s canvases speak a language that is at once simple, yet hard to understand. It is impossible to access them without poetry: one finds drawn images and words that never meet; instructions that can’t be fulfilled; invitations that remain unopened. Someone’s voice emerges within, everywhere and nowhere at once. The voice traps us in descriptions pointing to non-existing things: “This rectangle is a photograph of this entire painting,” one work claims, but, of course, there is no photograph in the canvas. Another entices us to imagine implausible qualities and actions, such as “sizeless,” “hypostatize,” “to cleave.” The works describe, direct, admonish, and tease the viewer. And like all good teases they are at once sensual and metaphysical, comical and dead-serious.

If painting is traditionally imagined to belong and reflect the constituted world, Arakawa inverts that relationship. This is because, as Duchamp once noted of Arakawa’s diagrams—and Madeline Gins constantly reminded us since—these are not paintings. Where did these post-paintings come from? How do they operate? Focusing on works featured in this exhibition, my talk will address major developments in Arakawa’s practice through the mid-1980s. I will situate Arakawa in relation to the reception and theorization of surrealist practices in Japan, and I will trace the shift his work took since his emigration to New York, and the beginning of his life-long collaboration with his partner, the critic and poet Madeline Gins.

In brief: the post-paintings emerge as a means first of examining the world of objects in their state as a yet-unformed possibility. Madeline Gins noted that the diagrams model, but are not just models. Arakawa found in them a method for examining potentiality, by indexing with a secret geometry a place somewhere beyond existence. Arakawa’s work sparked important critical debates on the nature of the image (Nakahara Yūsuke and Nicolas Calas), of absence and presence (Miyakawa Atsushi and Jean-François Lyotard), and on art’s capability as a “thinking field” (Gins), opening up a line of investigation that eventually led him to the body as the place where possibility resides.

Dr. Ignacio Adriasola teaches in the Department of Art History, Visual Art and Theory at the University of British Columbia. His research focuses on experimental art and culture in postwar Japan. His book Fragment, Image, and Absence in 1960s Japan is forthcoming from PSU Press (Fall 2022). 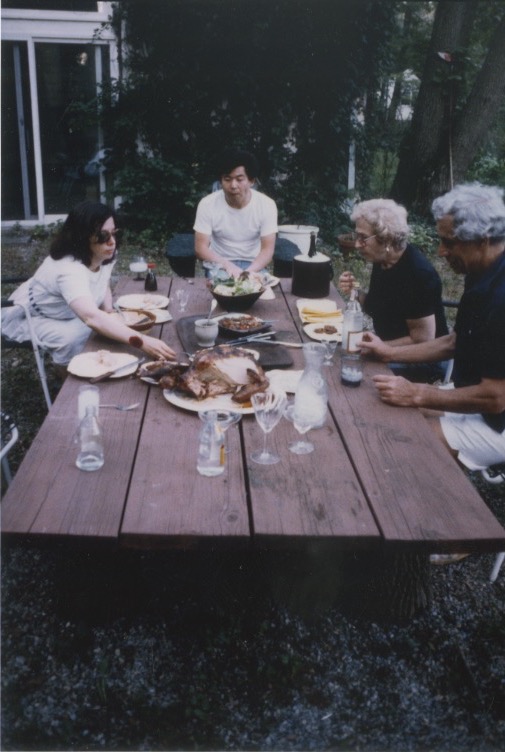 This fifth issue of Ambiguous Zones arrives partway into the holiday season. Like last year, the final few weeks of 2021 may not feel quite the same as previous years, but that is all the more reason to focus on spending time with loved ones, whether in person or online. The RDF archive has no shortage of photographic evidence that Madeline and Arakawa did just that year round. Regardless of how your celebrations shape up this year, we hope these photographs of Madeline and Arakawa dining with friends and family get you into the festive spirit!

We also hope you will join us virtually for Dr. Ignacio Adriasola’s lecture and tour of the exhibition ARAKAWA: Waiting Voices, live from Gagosian Gallery in Basel on December 9th at 11am EST (click here to register in advance).

In the meantime, we are sending warm wishes for a lovely December!

Top image: Thanksgiving in July, or a heatwave or somewhere warm in November? Madeline Gins, Arakawa, and Madeline’s parents, Evelyn Gins, and Milton Gins enjoy turkey (or duck?)
in the great outdoors, ca. 1977.